Woke up in Birdsville after finally getting a decent night’s sleep.  I had felt shattered from only three hours sleep the night before.

There was a glorious blue sky and again, strong gusty winds.  Brian and Linda left our party to head up to Bundeberg, Queensland.  While our much reduced crew flew out over the arid Simpson Desert towards Lake Eyre in South Australia.  The lake was rumoured to be full of water and brimming with birds.  While it was great to cruise over Australia’s lowest point and largest lake, the rumours may have been exaggerated…  There was a bit of water in North Lake Eyre and we did scare a few ducks.

After three hours straight flying and a last minute vomit from Louise (from now on we’re not wasting money on bacon and egg breakfasts for her), we landed in Marree to refuel and restock our stomachs.  There was a little bit of confusion on which direction the runway was and Pauly and I flew in at opposite ends.  I ran into the refueler I met earlier this year on the Central Australia flight.  It was nice to have a chat with a familiar face.  Dodgy weather was heading for us so we decided to leave stright away and head for sunny Hawker.

It was great to leave the cloud and strong winds behind.  Although Pauly and I had radio chat for quite a while trying to work out where each other was flying.  After constantly scanning the horizon we realised that he was flying about 1000 feet directly below me.

The scenery changed dramatically from desert to the spectacular Flinders Ranges.  Approaching Wilpena Pound was an awesome sight, standing up like a monolith against all the other mountains.  You really get an appreciation of the two mountain ranges that join to form a natural amphitheatre seeing them from the air.

18 nautical miles from the pound to Hawker, we set up the plane on its glide slope and aimed for the airfield.  I always love flying into these remote towns, some of which have the best airstrips – long and bitumen like Hawker. 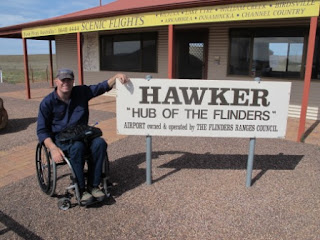 Tomorrow we head to Mungo National Park to stay at the Mungo Eco Lodge, which has been recommended by some flying friends.