Home > Blog > Day 7 – Crossing the most easterly point of Australia!

I was feeling a lot better today. I think the antibiotics must be kicking in & I hope my uninary tract infection gets sorted asap.

With the Illawarra Wings on today at Wollongong & the very long leg scheduled (around 6 hours flying – to Caboolture), we had to get going really early. Checking the weather forecasts, it said that we would have south easterly & south westerly tailwinds that would make our trip a little faster – thank god!

It was a 4.30 am wakeup for me & we were at the hanger by 6 am & we left at around 7.30 am. Thanks to Gordon Griffin for letting us use his hanger for our 2 night stay. This really saved us time in the morning in getting the planes ready to go.

When we took off from Wollongong, it was only about 10 min before we entered the allocated coastal route for aircraft – Victor 1.

As we passed the cliffs around Sydney, we had some amazing views of the expensive real estate & we got a glimpse of the Opera House, Sydney Tower, Harbour Bridge & Botany Bay. I’d been wanting to do this flight through Victor 1 for years so it was great to finally do it!

Our view of Sydney as we flew through Victor 1.

On arrival in Port Macquarie, Jon Barnaby & other members from the Hastings District Flying Club were there to meet us with tea/coffee & biscuits.  Thanks so much for all their support! On arrival I was also quick to notice the palm trees – a great sign that we are hitting warmer weather! I might even be able to take my jacket off soon. 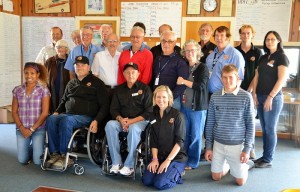 Me & the OWC Team with the Hastings District Flying Club.

Crossing the most easterly point of Australia – Cape Byron

As we headed up the east coast, I had to fly inland in some areas to avoid the Coffs Harbour controlled airspace. This took me up into the mountains which normally wouldn’t be an issue however the cloud base wasn’t very high so I had to squeeze in between the mountain top & the low cloud. I was glad to get away from this area so I could head back to the coast where it was safer flying.

We were all pretty excited to be achieving our 2nd of the 4 milestones on the trip – passing by Cape Byron, the most easterly point of Australia. Linda managed to get a good snapshot from the Piper Lance as I flew past the light house.

Me crossing the most easterly point of Australia – Cape Byron.

Again to get around the Gold Coast’s controlled airspace, I had to go around inland which was less of an ordeal than Coffs Harbour. It was quite an amazing sight to track along the coast of the Gold Coast. I was flying not much higher than some of the buildings. It was good fun. I really enjoyed it!

The view as we flew past the Gold Coast.

We continued up to our stop for the night – Caboolture – where we were met by quite a lot of people who wanted to have a chat, checkout my plane & take a few photos which was great.

We were also greeted by Chris Sharp & other members of the Rotary Club of Caboolture who have been extremely generous in helping us out for our 2 night stay here with accommodation, transport & a fridge full of home-cooked food! We are having lasagne tonight, I can’t wait, I’m starving.

That’s it – it was a huge day for us. Not only was it a long day but also physically & mentaly exhausting. I’m looking forward to the future legs as they will be much easier flying than today.

5 thoughts on “Day 7 – Crossing the most easterly point of Australia!”