Time is ticking down and its only five days until departure! I’ve just finished work for one month which is fantastic! I’m looking forward to getting the last things organised over the next few days.

For the last month I have spent every bit of spare time organising accommodation, finalising flight plans, and getting equipment.

I have had to do some unexpected extensive work on the engine of my aircraft in the last week, replacing some valves and rings on the pistons. It was a little problem that turned into a big one. Ah well, better now than the fan stoping in the middle of a desert.

I will do the test flight tomorrow (Thursday) just to make sure everything is OK. Fingers crossed!

I’m keeping a close eye on the weather, at this point its looking OK, but it can change very quickly. I better say a few prayers to the Flying Gods!

I can’t wait to get up in the air on Monday, I love the feeling when I first take off on a trip, point the aircraft in the right direction, and head towards the horizon. To me I feel as if I’m breaking out of a cage and flying to freedom with the anticipation of adventure and seeing what happens along the way!

I just got my new cover for the aircraft, which is really cool. Dianne McNamara from Punkin Head Air Sports, has donated the cover to On a Wing & a Chair for the Central Australia and Around Australia Flights which is greatly appreciated. 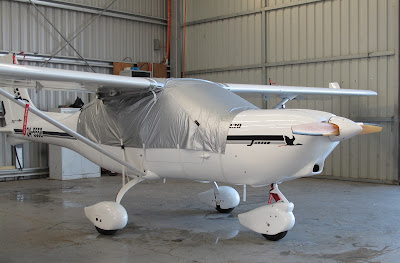 Aircraft Cover for the Jabiru J230.

As I will be leaving my aircradft outside during the trip, I need a cover to protect the windows and stop water leaking in through the door seals if it rains.

With limited space and weight requirements, its got to be small and light. Dianne has made one which is small enough to shove under a seat – only weighing around 2.2kg and fits into a small bag.

Stay tuned for the next update!